The Trail Runs Through It

Meridian sits on The Top of the Hill Country. Valley Mills provides the Gateway to beautiful Bosque County. Clifton ranks as the Norwegian Capital of Texas. And the trail runs through it -- right through the Heart of Texas.

The historic Chisholm Trail remains the one common thread that weaves through Bosque County, the entire Bosque River Valley and the Heart of Texas.

Come along, boys, and listen to my tale; I'll tell you of my troubles on the old Chisholm Trail; I started up the trail October twenty-third; I started up the trail with the 2-U herd; O a ten dollar hoss and a forty-dollar saddle; And I'm goin' to punch in Texas cattle; I woke up one morning on the old Chisholm Trail; Rope in my hand and a cow by the tail.

Instrumental in making the American Cowboy an enduring folk hero, the Chisholm Trail began simply as wagon tracks made by Scotch-Cherokee Jesse Chisholm in 1864 when he began hauling trade goods to Indian camps about 220 miles south from Kansas to his southern trading post near the Red River in Texas.

Although Jesse Chisholm died before the heyday of the Texas-to-Kansas cattle drives, his participation in several important Texas and Oklahoma historical events led to becoming the namesake of the legendary trail.

Moving to Oklahoma during a period when Cherokees migrated voluntarily, Chisholm became involved in a gold-seeking party in 1826, which blazed a trail and explored the region to present day Wichita, Kansas. Answering the call as a trailblazer, Chisholm helped establish a route from Fort Gibson to Fort Towson in 1830. He went on to become a member of the Dodge-Leavenworth Expedition, who made the first contact with the southern plains Indians on behalf of the United States federal government in 1834.

After Chisholm married Eliza Edwards in 1836, the couple resided in the area of her father's trading post on the Little River near its confluence with the Canadian River, where Jesse worked in the Indian trade.

As an interpreter and general aid, Chisholm took part in several treaties between the Republic of Texas and local Indian tribes, as well as between the United States federal government and various tribes after Texas joined the United States. While his diplomatic work spanned 20 years (1838-58), Chisholm also continued in the Indian trade, trading manufactured goods for peltry and for cattle.

During the Civil War, Chisholm mostly remained neutral as many residents of Indian Territory feared they might be massacred, either intentionally or as an accident of war if either side attempted to contend for control of the territory. Chishoom led a band of refugees to the western part of the territory, where they suffered privation as the trade had dried up during the war.

At the end of the war, Chisholm settled permanently near present-day Wichita, and recommenced trade into Indian Territory. In doing so, he built up what had been a military and Indian trail into a road capable of carrying heavy wagons for his goods, soon to become known as Chisholm's Trail. Later, when the Texas-to-Kansas cattle drives started, the users of the trail redubbed it the Chisholm Trail.

But before that happened, Chisholm died at his last camp near Left Hand Spring due to food poisoning on March 4, 1868.

From those humble beginnings, the Chisholm Trail became the major route out of Texas for livestock. Although it was used only from 1867-1884, the longhorn cattle driven north along it provided a steady source of income that helped the impoverished state recover from the Civil War. Youthful trail hands on mustangs gave a Texas flavor to the entire range cattle industry of the Great Plains.

The war between the states proved devastating to the South, crushing the entire economy. Cotton had been the major industry for decades, but the Civil War ruined much of the land and diminished the labor force. Texas fared better than most states, since no battles were fought on Texas soil. However, Indian depredations wreaked havoc.

Then came one of the most important questions in American history – where’s the beef?

The answer proved to be the salvation of Texas. When the Civil War ended, the state’s only potential assets were its countless longhorns. Easterners had developed a taste for beef, and demanded all they could get. Thanks to the Spanish, Texans had plenty of beef and plenty of men who needed steady work.

For a period of about 12 years, millions of longhorn cattle, mustangs and cowboys traveled from South Texas northward to Kansas, creating the legend of the Chisholm Trail. The “Beef Trail” or “Santa Fe Trail” turned west and on to the Canadian border. J.J. Cureton and his son W.E. drove cattle west to California.

At first, the route was merely referred to as the Trail, the Kansas Trail, the Abilene Trail, or McCoy's Trail. Though it was originally applied only to the trail north of the Red River, Texas cowmen soon gave Chisholm's name to the entire trail from the Rio Grande to central Kansas.

The earliest known references to the Chisholm Trail in print were in the Kansas Daily Commonwealth in 1870. On April 28, 1874, the Denison Daily News mentioned cattle going up "the famous Chisholm Trail." The legendary name stuck.

Traveling along the Chisholm Trail, the herds followed the old Shawnee Trail by way of San Antonio, Austin, and Waco, where the trails split. The route continued on to Fort Worth, then passed east of Decatur to the crossing at Red River Station. From Fort Worth to Newton, Kansas, U.S. Highway 81 follows the Chisholm Trail.

Resembling a tree, the roots were the feeder trails from South Texas, the trunk was the main route from San Antonio across Indian Territory, and the branches were extensions to various railheads in Kansas.

LIFE ON THE TRAIL

Consequently, cowboys began to gather and brand wild cattle and drive them north. There were many branches of the beef trail, but one main trail followed present day Interstate 35.

At Waco, the Brazos River had to be crossed. Due to the volatile nature of the Brazos, the city of Waco built a suspension bridge over the river to help the cattle and wagons and drovers to cross more easily.

Some trail bosses opted not to pay the three cents per head charge for the use of the bridge, so the cattle splintered off from the main herd at Waco and crossed the Bosque at old Valley Mills. Presenting a great opportunity for the cattle to spread over the prairie between the Bosque and the Brazos and fatten up before heading north, it also served as a merging point for herds coming from the west.

Enterprising Bosque County locals waited for these “cowpunchers” with their locally grown fruits and vegetables, and the cowboys eagerly bought their wares. Eating beans from the chuck wagon everyday must have been monotonous. Mrs. Higginbotham, who lived on Mesquite Creek, ran what was known as the “Chisholm Trail Roadhouse” where she sold pies and cakes, bread and butter and fresh buttermilk.

The herds left old Valley Mills, making only about eight miles a day, stopping for the cattle to rest and feed on the prairie. So it was some time before they reached the next town, Kimball.

“I am certain that they had to replenish personal items such as tobacco and such, not to mention libations, possibly post letters, fresh bread and so on,” said Ruth Crawford, the Bosque County Historical Commission archivist and retired director of the Bosque Collection in Meridian. “There was a ferry that the wagons could use when the water was too high, and a holding pen, which I’m sure had a fee.

“More important than any meager monetary gains the citizens received was the excitement of the event. People were struggling to get back on their feet and reconstruction was difficult. Soldiers were still healing from emotional and physical wounds. The cattle coming through was a welcome diversion, sort of like the circus coming to town.

“Excused from school for the event, the school children would put their ears to the ground and could gauge how close the herds were getting. Watching the cowboys come through must have been thrilling.”

With the influx of strangers, travelers and newcomers, maintaining law and order took on new challenges.

“Meridian had several saloons,” Crawford said. “Gambling was illegal, but it was still enjoyed by many of our upstanding citizens as evidenced in the criminal minutes. I’m sure some of the cowboys must have  rode over in the evening to visit the saloons.”

For the cowboy, trail drives meant weeks of grueling monotony and hardship interspersed with hours of very real danger. River crossings proved dangerous, while lightning storms and stampedes could be fatal. Violence, vigilante groups, and cattle rustling caused further problems for the drovers.

A trail herd was moved by a trail boss with eight-10 cowboys accompanied by a horse herd, a cook, and a chuck wagon, which carried a two-month supply of groceries, cooking equipment, and the cowboys’ bedrolls. On the trail, the chuck wagon was the center of the cowboy’s universe.

In the early years, most of the cattle moved along the Chisholm Trail came from South Texas, where they were raised by ranchers who practiced a system of open-range ranching characterized by unfenced pastures, annual roundups of cattle, and long trail drives to markets.

The cattle did not follow a clearly defined trail except at river crossings; when dozens of herds were moving north it was necessary to spread them out to find grass. The animals were allowed to graze along for ten or twelve miles a day and never pushed except to reach water; cattle that ate and drank their fill were unlikely to stampede. When conditions were favorable longhorns actually gained weight on the trail.

After trailing techniques were perfected, a trail boss, ten cowboys, a cook, and a horse wrangler could trail 2,500 cattle three months for 60-75 cents a head. At the time, it proved far cheaper than shipping by rail.

END OF AN ERA

But when the Plains tribes were subdued and the buffalo decimated, ranches sprang up all over the Plains stocked with Texas longhorns and manned by Texas cowboys. Raising cattle on open range and free grass attracted investments from the East and abroad in partnerships. Texas tried to outlaw alien land ownership but failed.

As a result, barbed wire closed the Chisholm Trail by 1885. In its brief existence, it had been followed by more than five million cattle and a million mustangs, the greatest migration of livestock in world history. By 1890, railroads had penetrated into Texas and there was no longer a need to drive cattle to Kansas in order to ship them to market. Combined with the introduction of pastures fenced with barbed wire, it meant the end of the era of the great trail drives.

Even so, the end of cattle drives merely marked the beginning of the world’s fascination with the legendary Texas cowboy. And in reality, the legendary trail still exists. In 2014, the North Texas Tollway Authority constructed a 26-mile-long toll road named after the trail – the Chisholm Trail Parkway – connecting downtown Fort Worth to Cleburne.

So for all practical purposes, the legacy lives on as we continue to traverse the Chisholm Trail through the Heart of Texas today.

The Old Chisholm Trail is covered in concrete now; And they truck 'em to market in fifty foot rigs; They blow by his market never slowing to reason; Like living and dying was all he did; This is the last cowboy song the end of a hundred year waltz; Voices sound sad as they're singing along another piece of America's lost. 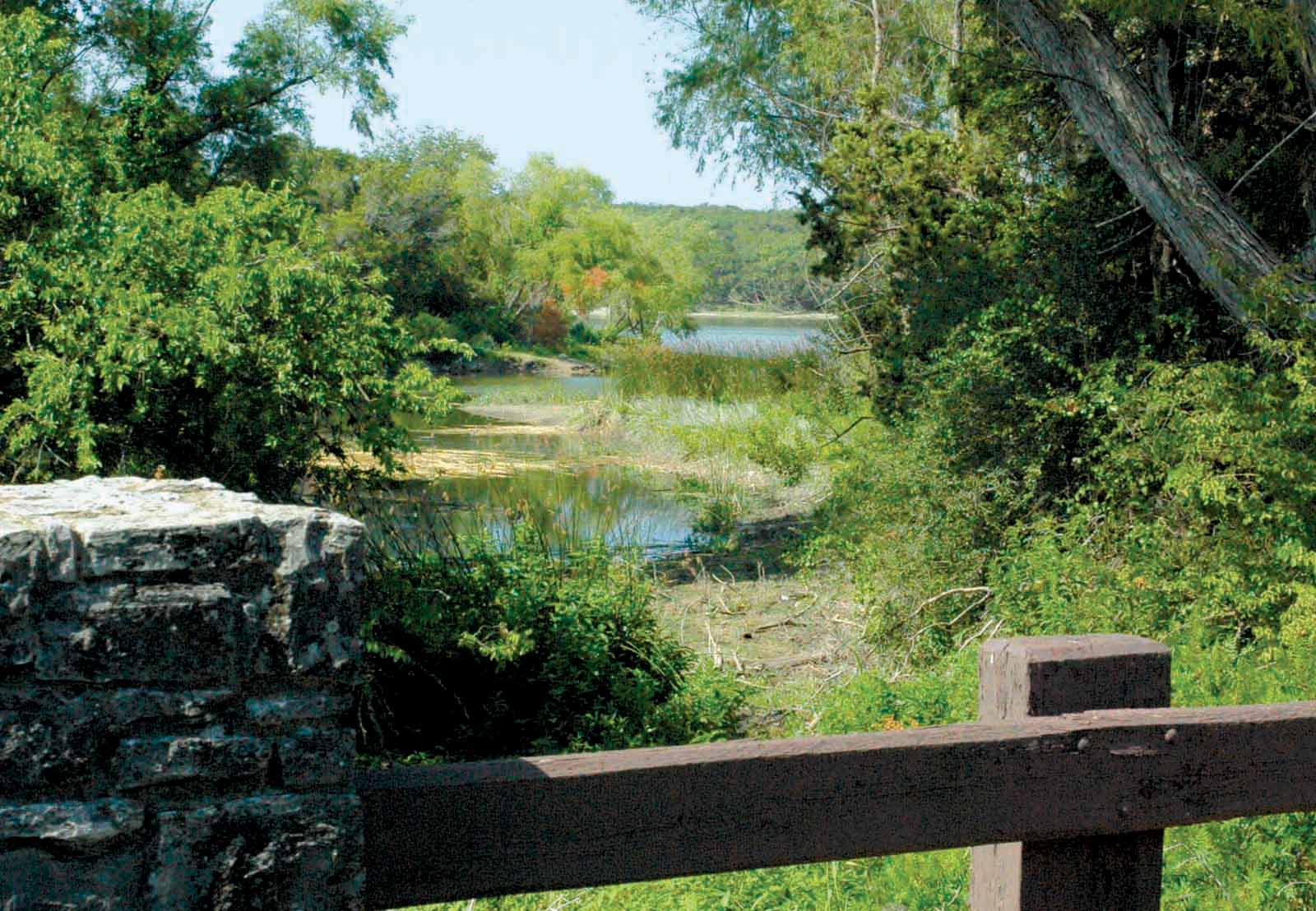