CLIFTON – A ruby anniversary is always a reason to celebrate big, and that is what the Bosque Arts Center is doing this year with their annual Big Event fundraiser. They are combining fun, food and festivities into a two-evening extravaganza, combined with an fundraising e-auction.

The Bosque Arts Center was chartered in 1981 and this year marks the 40th anniversary of its annual “Big Event,” the sole fundraiser which has helped transform the non-profit fine arts organization into an acclaimed cultural oasis for young and old alike deep in the heart of rural Central Texas.

Each Big Event has carries a unique theme which through the years has included Mardi Gras, circus, safari, various forms of arts and this year’s western flavored Stetson Ball. Big Event weekend will be held over two nights this weekend on Friday and Saturday, April 1-2.

Friday night’s Casino Royale and will transform the Tin Building Theatre into a gambling venue complete with slots, blackjack, roulette, craps, and Texas old ‘em. Casino Night runs from 7 to 10 p.m. and funny fund wins can be traded for a wide array of prizes. The night is BYOB and tickets are $50 per person and may be purchased in advance or at the door.  For ticket information visit the BAC website at bosqueartscenter.org or call (254) 253-0690.

The fundraising continues with a Saturday evening of Stetson Ball status fine dining, drinking and dancing with musical entertainment by Brian Barrett and band – aptly named Judge B and the Belvidere Dabsters for the event. Hospitality begins at 6 p.m., with chances to win raffle items like Texas Rangers tickets, designer items, and art.

A special attraction this year will be the Chuckwagon Silent Auction, with one of a kind items such as Virginia Richards’ delicious pralines, one dozen cupcakes infused with alcohol available every other month for a year from Betty Murdoch, a surprise dessert by Bryan Davis, Thomas Oliver’s brisket & ribs, barbeque by Larry & Micki Tigner, as well as select jewelry and merchandise. Saturday will also include raffle items, for example primo Texas Ranger tickets.

The special 40th anniversary cake will be enjoyed following a catered dinner at 7 p.m. by Olaf’s Restaurant and presentation of the Joan Spieler Lifetime Achievement Award.

The annual award recognizes overall longtime contributions to the Bosque Art Center and was first presented in 1997 to Spieler, generally considered the founder of BAC.  Upon her death six months later, the award was renamed in her memory and has since been presented to 21 times to individuals or couples over the past 25 years.  Music and dancing will follow with Brian Barrett’s band, Judge B. and the Belvidere Dabsters, featuring country classics sprinkled with rock and roll.

Through four decades and thousands of volunteers, the annual Big Event continues to serve as the sole fundraiser which supports the day-to-day operation of the Bosque Arts Center.

“I can’t help but feel Joan Spieler and her fellow visionaries who helped make this possible would be proud of where we are today,” commented BAC President Leanne Donner.  “The Bosque Arts Center is an amazing example of what lots of hard work and people with big dreams can accomplish.”

The Bosque Arts Center was formally dedicated in Clifton on September 7, 1981, as the Bosque County Conservatory of Fine Arts following years of hard work and the determined vision of local artist and businesswoman Joan Spieler. The Conservatory, as it was generally called for decades, was housed in the three-storied 1923  Administration Building of the former Clifton Lutheran College on the west side of town.  The college campus was closed in 1954 and for many years the building and grounds served as home to Gearench Manufacturing (today’s Petol) prior to its relocation south of town.

In early 1982 the old college property was officially deeded by C.E. “Pat” Olsen for the creation of a fine arts center.  A board of directors was organized and its first managing director hired. Plans immediately began to recruit volunteers to clean the dilapidated building, start a membership drive, and hold a county-wide fundraising event to kick-start the organization. The first public viewing of the Art Center and initial fundraiser would be a “Big Event,” promised organizers, and it was scheduled for March 28, 1982.

The first Big Event was held on a Sunday afternoon from 2 to 5 p.m.  It was billed as, “An introduction to the possibilities of the Bosque County Conservatory of Fine Arts.” The first two floors of the old college building were brimming with activity which showcased a “cultural sampling,” for plans to feature “all the arts under one roof,” as envisioned by Spieler. The third-floor auditorium was in such a deteriorated state it would be another 35 years before fundraising efforts would see it restored and open to the public as the Frazier Performance Hall.

At the first Big Event visitors roamed throughout the old building and enjoyed exhibits and demonstrations which included sculpting, painting, music and singing, crafting, quilting, a puppet show and band.  Donated arts and crafts were displayed in the metal tin building at the rear of the main structure where a live auction was held. From those humble beginnings a multitude of auction items supplemented prints and various artworks. Some varied auction items included four pounds of pork sausage, a dozen eggs and four jars of homemade jelly, dog food, oil changes, homemade bread and cases of soda. The first Big Event was considered a great success with an estimated crowd of 1,500 touring the buildings and some 200 charter memberships received. The auction grossed $3,478.

Since the beginnings of the Big Event, the fundraiser has grown and continues to flourish.

The success of the first Big Event ignited the rapid interest in the local arts and the formation of numerous branches under the Art Center umbrella including theater, art, photography, quilting, chorale, pottery and culinary. By the time the second Big Event came around in 1984, even more auction items were included and the fundraiser began to be known for showcasing original works of art by the multitude of generous artisans representing the wide spectrum of genres to be found in Bosque County and beyond.

Over the years, the Big Event has evolved with the times to best reflect today’s changing technical world. An online auction dubbed e-BAC has taken the place of the Big Event live auction since 2019 with great success. The online auction still contains the same amazing variety original art by nationally renowned artists from the Cowboy Artists of America and Oil Painters of America are featured heavily in the online auction. Bruce Greene, Martin Grelle, Tyler Crow, Gary Niblett, George Hallmark, Kathy Tate, George Boutwell, Kim Hill, Lloyd Voges and Jean Olliver are but a few of the outstanding artists represented in the 2022 e-BAC, which also includes photography by Vickie Mitchell and Marvin Grelle.

Several of the paintings donated by artists and members, on sale during the online auction, are displayed in the BAC atrium. The e- auction also features one-of-a-kind items and package deals now available to bidders beyond the confines of the Tin Building Theatre like getaway packages with fun multiple-night stays like Round Top 101, Screen Door Inn B & B, Texas Safari, and weekends at the “Hock & Spit” and “Love Shack.” Other items in the auction include a David Yurman diamond and green amethyst bracelet, a 65-inch 4K TV, a family photo shoot, a sitting for an original sculpture, and chances for a Ruger rifle and ammo drawing, unique dinners and events, adult beverage bundles, and merchandise such as a Big Green Egg, and a CobraTec knife.

In the spirit of this year’s Stetson Ball theme, the Joyce and Roland Jones donated a custom saddle that has never been ridden. The saddle has an interesting history: Joyce had it made for Roland’s 60th birthday; unbeknownst to her, Roland had just bought a new saddle. He felt the birthday saddle was too nice to be used, so it has been on display at their lake house all these years. Tack included with saddle. The piece was crafted by Vega Custom Saddles in Greenville. The makers are known for their quality work and have reportedly deep connections to history. Worthpoint.com notes that the Vega family worked for the legendary Billy Cook in the 70s and later formed their own company.

Last year’s online auction exceeded $100,000 in sales even as COVID-19 restrictions brought activity at the Art Center to a standstill during 2020 and much of 2021. This year’s online e-BAC auction ends on March 30. Visit the e-auction website at: Event.Auctria.com, visit the Bosque Arts Center website or call 254-675-3724 for more information about this annual fundraiser for the nonprofit arts organization in Clifton. 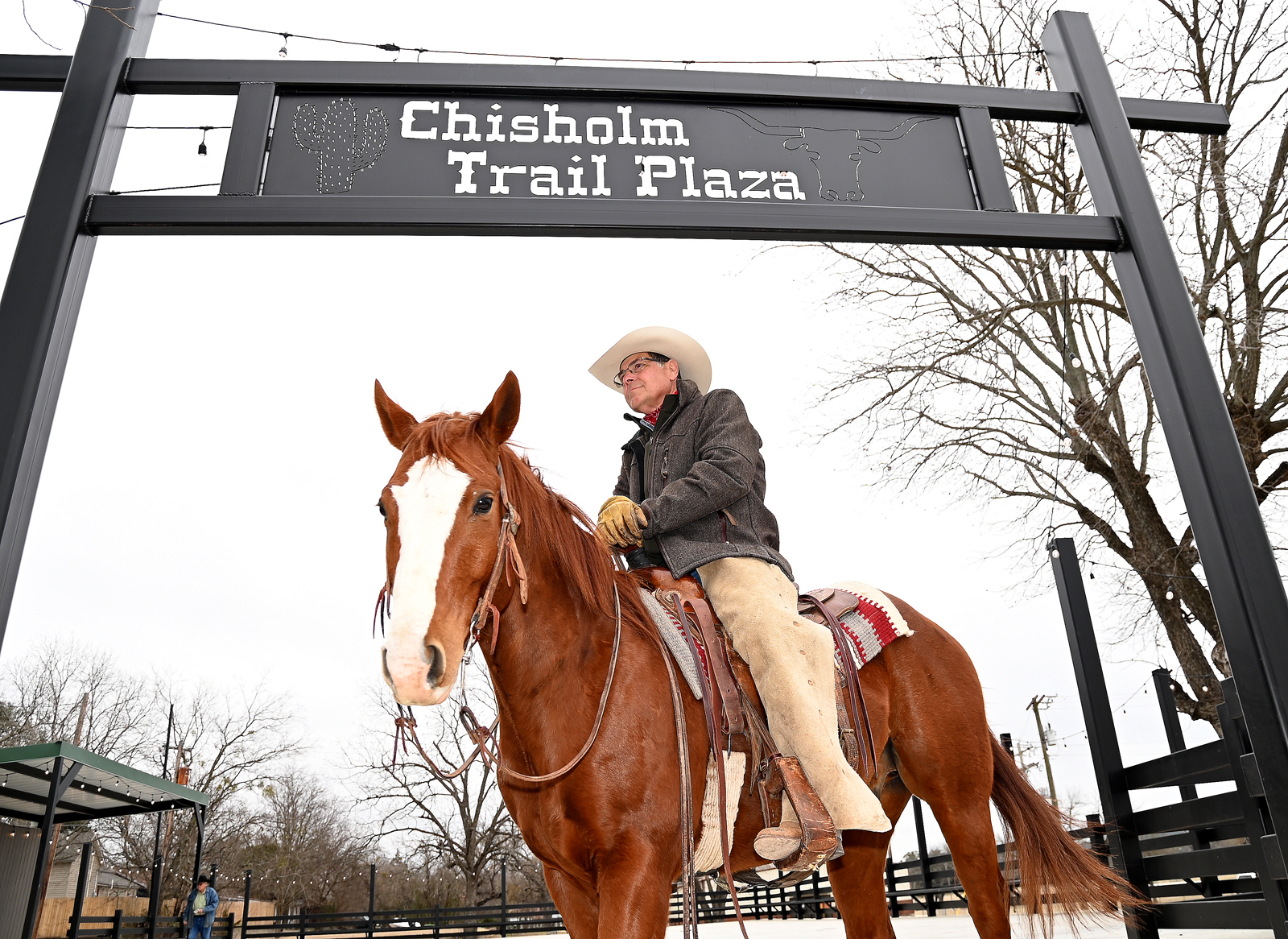 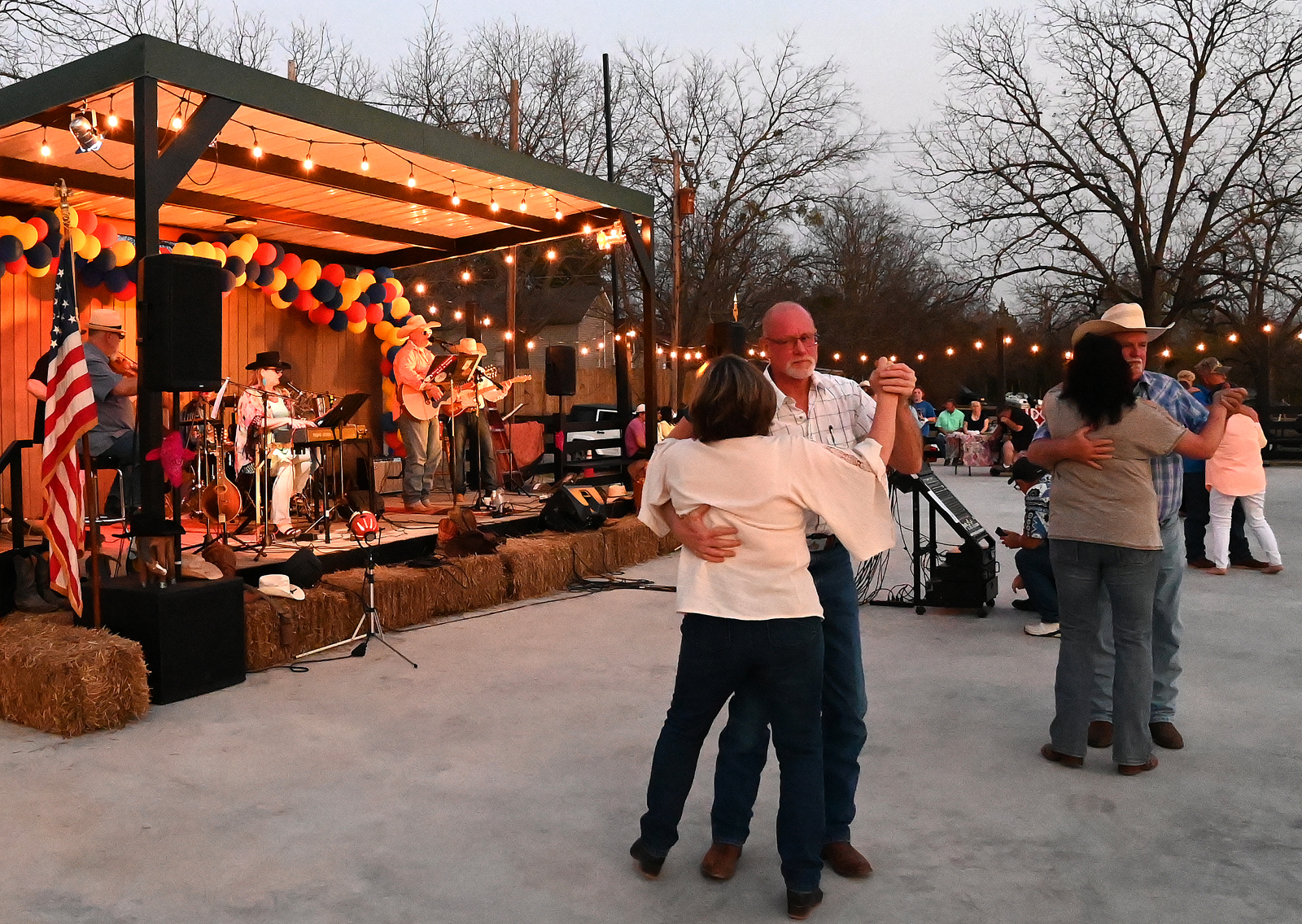